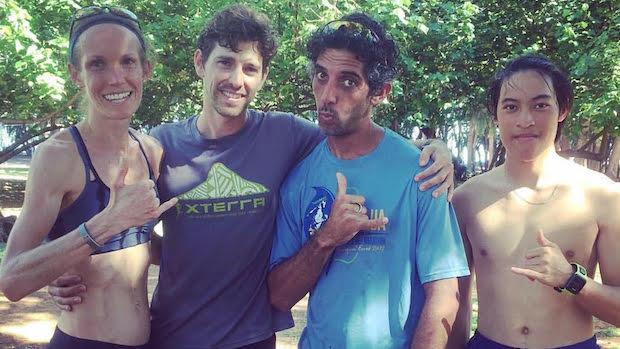 April 9th is the Hapalua Half Marathon-a one of a kind event-which boasts a unique format where runner's representing "Team Hawaii" are chased down by a small field of Kenyan and Japanese elites.

This year, Team Hawaii's roster is comprised of 22 runners from all neighboring islands with one goal: to cross the finish line ahead of all others. In this event, it does not matter which athlete has the fastest time in the end, all that matters is being the first-despite the handicaps placed on different groups. Notably, Maui has possibly its strongest representation this year with two experienced marathoners, and a collegiate athlete among its lineup.

Ryan is the youngest competitor on Team Hawaii at the age of 20 and is currently training on Oahu despite representing Maui. In his high school days, Ryan ran for Maui High School. He became a pivotal factor in his cross country team's success by winning the section title, qualifying for the state championship in 2014, and placing his school first in Hawaii state's public schools. His three mile time of 15:57 still stands as a school record contrary to his 5k personal best of 16:19 which converts to 15:45 for 3 miles. Tsang also holds the school record in the 800m with a time of 2:04.56. In track and field, Tsang qualified for States in the 800, 1500, and 3k but ultimately decided to forgo all events other than the 15 to save his energy which resulted in a podium fifth place finish in 4:17.40.

Currently, Ryan attends the University of Hawaii at Manoa where he trains independently to compete in road races and localized track and cross country meets. His training leading up to the Hapalua has been full of long runs at a moderate pace and an 8 mile tempo once a week at 6:20 pace; a month ago he also raced an 800 off of no speed work in 2:04.

"These past few months have been great. I had a little setback to get past after my last race but it feels great to be back now. It's all about balance; going hard on the hard days yes, but I've found going easy on the easy days is just as important. I'm running longer, harder, and smarter than I ever have in my life. I'm excited to run my first ever half marathon this weekend and it should be a good learning experience."

Tsang is currently coming back from an injury, but raced the Ford Island Bridge 10k last weekend as a prerequisite to the Hapalua where he took it easy and finished third with a time of 36:47.

The 2017 installation of the Hapalua Chase will be Matt's fifth overall time competing for Team Hawaii. He first started running in his middle school years, and has kept his efforts up since then. In 1995 he qualified with the Maui High track and field team for the state championship. Later on he spent his collegiate years training in various places across the country; he stayed a while in Eugene, OR and at altitude in Flagstaff where he had the opportunity to train with former world record holder in the marathon Khalid Khannouchi.

Since then, Matt continues to compete in road races of all standard distances; for the past four years he has competed in the Honolulu Marathon where he won the honor of "Kama'aina" (first finisher from Hawaii) from 2012-2015. This resulted in him being able to travel to a race of his choice; Matt chose to race the Madison Marathon in Montana, where he won in a time of 3:54:30 at altitudes exceeding 9,000 ft.

In her high school years Malia attended and competed for Seabury Hall, a private school institution on Maui. It wasn't until she graduated that she had her "break out" years; pursuing triathlons in this time, she qualified for the 70.3 World Championships in 2011 and 2012. In 2013 she had her best finish, having been labeled as the "Fourth Amateur Female in 2013."

In her marathon debut she finished as the first female overall in Atlanta, causing her to further pursue the sport or running and steer away from triathlons. Since then she has raced in five marathons, her most recent being the 2015 Honolulu Marathon where she placed 8th overall and as the top American. Also, she raced in the Bear Chase 50k where she broke the four hour barrier in 3:56, setting a new female course record. In 2016 she finished third overall and first Kama'aina in the XTERRA Trail Run World Championships in December on Oahu.

The organization known as RunCzech has had strong ties to the Honolulu Marathon which also hosts the Hapalua. The same as the year before, they are bringing a strong field to chase down Team Hawaii. The fastest half marathon personal best is held by Abraham Kipyatich who-in the past-has run 1:00:03. Behind him, Philip Tarbei holds the second fastest mark of 1:01:21. After that, Japanese athletes Yuki Yagi, and Kayoko Fukushi (female) have run 1:01:37 and 1:07:26 respectively-the latter being an AR.